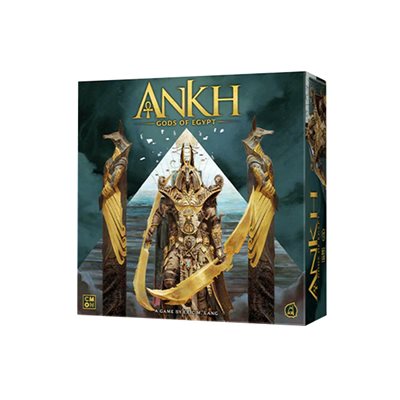 For centuries, Egypt had been a polytheistic society. But now, the civilization is moving to a monotheistic religion. The gods are fighting among themselves for the veneration of the populace. In Ankh, players take on the role of the gods of Ancient Egypt. They’ll fight for the adoration of the populace, building up their followers, dedicating monuments, recruit monsters their side, and divide the desert in order to establish their dominance. In the end, only one will remain.

-Unique Action Mechanic - Players perform two actions per turn, picking from the action board, but can only do a second action lower down the board than their first.

-Fight Over Followers - Players face off against one another for the hearts of the population. However, partway through, two gods may merge and become one, possibly giving them an edge.

-Taken From Egyptian Lore - All of the gods and monsters in the game were modeled from Egyptian lore, and their abilities created to match what powers they had according to legend.