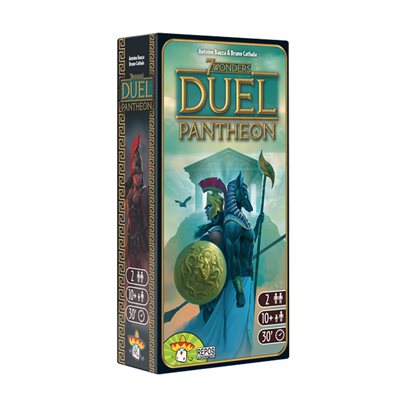 Pantheons from Greek, Egyptian and Middle-Eastern civilizations are added in 7 Wonders Duel: Pantheon. Collect mythology tokens to choose which deities have a place in the Pantheon and offer tokens to court them to be on your side. You can activate a god or goddess instead of taking a card from the pyramid, you just have to pay whatever that deity demands from you then place it next to your city.

-Ask Isis, Zeus, Enki, Tanit or Minerva for their divine help against your enemy

-Includes two new wonders: the Sanctuary and the Divine Theater

-This is an expansion. A copy of the following is required to play: 7 Wonders Duel